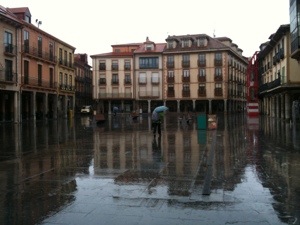 The streets and skies of Astorga were wet yesterday morning so we had to don full rain gear. Then we proceeded to put in about 5 km walking from one end of town to the other and back, trying to find a place to get our credentiales – pilgrim passports that we get stamped daily to prove that we have walked the route.

After an hour or so at the Gaudi palace and Museo de Caminos (not that interesting since we were preoccupied with starting our camino).

So it was 1 pm before we exited Astorga and got properly on the way.

The weather eventually turned into perfect walking weather, which meant that we sweated in our rain gear. It is hard to get this right! 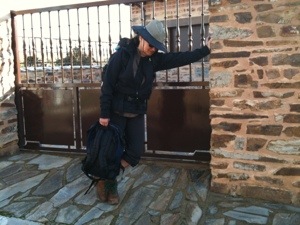 After 15 km we arrived at El Ganso, somewhat tired to say the least, and ate a filling but unremarkable meal at a local place, and picked a private albergue that had the inviting sign “Abierto” (open) even though no one was there. We followed posted directions and made ourselves at home in the sleeping room with capacity for 10 people. Twelve hours later we made breakfast – toast and coffee – left 8€ each (what the guidebook said was the rate), and still no one else had appeared. We were very pleased with the arrangements! 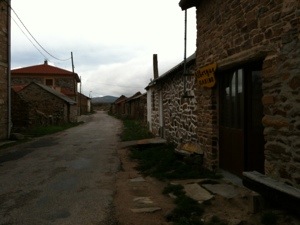