Today was meant to be another easy day, being only our second walking.

First a nice 7 km trot under overcast skies. Dressed exactly right. Then another 5 km, planning to have the option of an additional 5 km if all went well. It did go well, so we decided to do the last 5 km and thus walk 17 km in total.

The weather had taken a turn for the worse so we paused under a piece of an ancient crumbling house to add clothes and do some rearranging. By the time we emerged from this complicated maneuver, it was pouring rain and I soon realized that I should have added a fleece layer when I had the chance. I decided against stopping in the rain to disrobe again. At least I had rummaged to the bottom of my pack to retrieve some warm gloves. 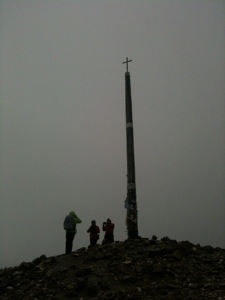 We forged on and on, for the last 5 km to Manjarin where I thought there were a couple of places to stay. Through driving sleet, snow and hail on the highest areas of the camino at 1500 m! Got filmed by a documentary film maker as we were leaving a stone at the Iron Cross. This is a major monument on the camino, where pilgrims symbolically leave their troubles when they add a stone brought from home to the huge pile at the base of a cross. It is a dramatic sight and moment as one reflects on the thousands of people who have passed that way over 1000 years. However I was not feeling reflective as I shivered and my glasses were covered with sleet (in spite of my nifty use of a sun visor under my rain hood).

On to Manjarin… I was getting very cold so was thrilled to approach the small community. Turned out that there was no accommodation except for a Refugio for needy pilgrims such as ourselves.

The refuge was VERY welcome and we considered staying the night. However, the absence of electricity was one factor that made it less than appealing. There was a tarp-covered foyer with pilgrim tokens for sale, hot tea and coffee for a donation, an inner room with a wood stove going, an outhouse somewhere, 5 cats and presumably room for 12 people (but we never saw where they could possibly sleep). Understand, please, that I was very thankful for the refuge. However, it was not what I had in mind for the evening.

After 20 minutes of warming up and adding a layer of clothes, I felt ready to proceed. (N had been dressed very warmly and smugly said she felt like she was in a sauna all afternoon.) Here it was – 4 pm, no longer daylight saving time, and the next village was 7 km away.

Off we scurried. I was much more comfy with the fleece under my rain jacket, and we were always within 50 m of a major road, so we were not really fearful. Our clothes were excellent, in fact. Those 7 km took 2 hours in worsening sleet, snow, fog and hail. Walked on a dirt path with several very flooded areas. Sorry I didn’t take more pictures with my phone, but I was NOT going to remove gloves, unzip jacket, etc. to do so.

All the while we worried about a Japanese couple who we had passed, who were clearly ill-prepared for the weather and one of whom appeared to have a walking handicap. I can’t imagine how they would have made the segment that took us 2 hours. We hoped they would call for or flag down help on the road, which was nearby for most of the time.

Finally the clouds blew over, precipitation stopped and we descended into a village.

A man was walking his dog and started up a conversation. He ran a casa rural with a nice room at $35 including breakfast, and we would be welcome to look at it. (Possibly he had binoculars and regularly watched for bedraggled people coming down the mountainside, and took his dog for a walk at that time. In any case we were happy and came to La Trucha to enjoy hot showers, fresh sheets, and a delicious vegetarian dinner.

Our boots are drying over the fireplace and we are comfortably planning tomorrow’s trek, quite pleased with ourselves for having walked 25 km and still feeling OK.. 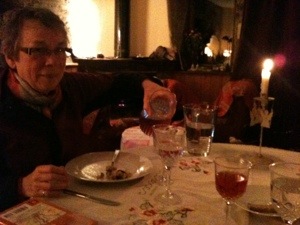