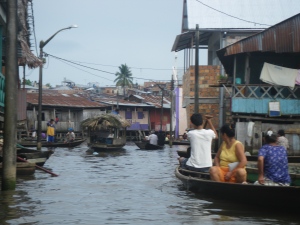 Friday was my last day in Iquitos. It started very rainy but soon cleared up. The hotel people got a guide (really just a friend of theirs named Saul). I wanted to go to the part of town that is the famous floating town and marketplace, Belen (which means Bethlehem) but I preferred to go with someone else as it is a bit of a sketchy place, to say the least, and I do have some modicum of caution.

So I got into the back of his moto-taxi (“tuk tuk”) and off we went to the Venice of Peru, so named because the residents use canals and boats instead of cars to move around their neighbourhood. The houses are built on stilts and float up and down as the flood levels change over the year.

In Belen we parked near a shop where the owner would watch the moto-taxi. Went down to the water and paid a fellow $3.30 to take us on a motorboat tour of the floating town.

It would take too much time to describe. You’ll have to go there! 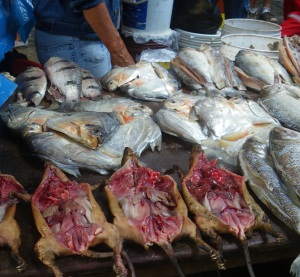 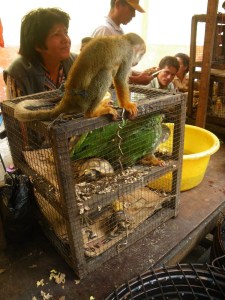 Then back to shore and a walk through the market. It is a very noisy, muddy place, where everything is sold from potatoes, charcoal (for cooking), vegetables, cheap clothes and housewares, to fruit, fish meat (even guinea pigs slaughtered and laid out), parrots, monkeys and turtles.

Went to an artesan market for tourists. I always enjoy looking at the crafts. Turns out that Saul paints and had some painting there. However he was not at all trying to sell them to me. Just as well because I wasn’t about to buy any.

Finally to the place where 2 major tributaries merge and become the Amazon River. Took a boat out to be able to say that I had actually been on the Amazon.

On the way home, got a good photo of some pigs on their way to market. 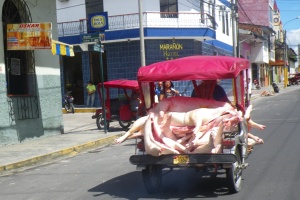