I don’t apologize for being a band wagoneer upon occasion. Bandwagons are fun! We should all be able to jump on them when so inspired. One has to hope that the wagon and streets are safe and the people on the wagon are compatible. Reckless bandwagon drivers may need to be removed. 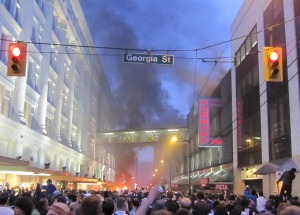 Did you know that Wikipedia has a list of riots in history, and Vancouver is the most recent entry?

The riot was disappointing and disturbing, but the media are going overboard in the analysis and judgement of the onlookers. Wonderful and terrible things happen and our immediate responses can be  stunningly different. I understand the  urge to watch and photograph a train wreck. Mob mentality is a tricky subject,  and something that civilization struggles to control. The fine line  between a crowd and a mob was illustrated on Wednesday night. The problem is as Andrew Potter points out, that “Forget Freud, Forget Marx. Rioting, above all, is fun.” I certainly don’t condone the actions, but I am a little uncomfortable with the self righteous indignation and over-analysis.

Vancouver is my favourite city, but it has long bothered me to hear and see the jingoistic ads promoting tourism in British Columbia – “the best place on earth” we are told over and over again. “The most beautiful city in the world.”   [I’ll stay away from the broader topic of  Canadian chauvinism for today, and focus on the Stanley Cup 2011 riot.] The spontaneous messages written on plywood covering smashed windows are more touching.

Vancouver tops various international ratings for most liveable city in the world. I agree with those ratings, which is why I live in the area.  Of course, the high cost of housing keeps me from living in the city of  Vancouver itself, but I consider it to be my home – by birth and by choice. I  accept the housing cost as the price to be paid for the benefits. It is what it is.

Being the “most beautiful” anything is not something one should continually brag about and take on as the core of one’s identity. If the most beautiful girl in the school were  followed around the schoolyard by minions carrying placards saying “So-and-so is the most beautiful girl in the school,” and her family had bumper stickers,  a sign in the front yard, a recording on the answering machine and regular newspaper ads, it would get tiresome very fast and would be incredibly arrogant. She certainly wouldn’t win the next popularity contest. We can have fun with that approach for a couple of weeks during the Miss School Beauty contest, but not forever! Similarly, I totally accept the practice of scholarship honours, sporting prizes, political campaigns, and best city declarations, but we need to keep a teensy bit of humility in the picture.

Why does Vancouver (and British Columbia) think it can go around telling everyone that it is more beautiful and a better place to live than their cities, and then expect to be loved universally? Other places are totally wonderful in their unique ways. Don’t get me wrong – I fully favour competition in school, sports and life. And winners should be declared, from time to time.

When our kids were young, the current philosophy seemed to be to make every child feel “special.” I declared on many occasions that I did NOT want my kids to think they were special. (Of course they were special to me  – every kid should be special to their special people. Like cities, they are totally wonderful in their unique and sometimes private ways.) Children should learn that they are no more special to the world than anyone else. I am pleased  – even proud, dare I say it – that they all grew up to be responsible people who expect to work for the things they want to enjoy, and nevertheless to accept that life
is not always fair.

So, if Vancouver leaders want to change city culture, they should start with humility as a necessary companion to pride. We have all the rest!

[Note: Ironic lack of humility in the last sentence was intended.]