Daughter in Australia sent me this link to a Melbourne newspaper  that was celebrating bumping Vancouver from the top of the “most livable city” list.

I thought it was quite funny that they put a photo of the riot to illustrate Vancouver’s downfall. (See my post on the riot.) Apparently the riot won’t actually affect the scores until next year, so Vancouver may drop further and all of you can smirk. The funnier thing is that Vancouver lost because it suffered a “a small adjustment” in its score because of the closure of the Malahat Highway on Vancouver Island after an oil spill last year. But the Malahat Highway is nowhere near Vancouver – 60 kilometres plus a 2 hour ferry trip across a large body of water away.

Oh well. I suffered on the weekend by having to spend some time in only the third most liveable city. I volunteered to take care of the plants, while son and girlfriend are away. They needed major intervention, since they are dead.  (I am talking about the plants here.)

Patio gardening is hard work – hefting pots of various sizes and bags of soil, bending down, getting up, dragging heavy pots, spreading a plastic sheet so that scattered soil didn’t get between and under the concrete slabs of the deck. Then clean-up – taking away the rejected soil, dead plants, dirty pots not in use, dirty plastic sheets, etc. In my backyard I can toss things under a bush at the back until another day. But on an urban 9th floor balcony, one doesn’t have that option.

Between 11 a.m. and 2 p.m. it was so hot that I couldn’t walk on the concrete deck without shoes. (And you always thought it rains non-stop in Vancouver.) So I came inside and polished the brass table (handed down from my mother, and also in need of major intervention).

All day I was pretending to be a yuppie (or at least an uppie), since the neighbourhood is SOOO chic. I said hello to the security guy every time I passed through the lobby, which was quite frequently as I unloaded gardening supplies from the car parked in front. Eventually I parked in the underground maze, so I could bypass the lobby by taking the elevator right up. 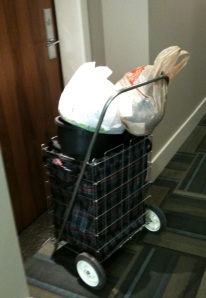 Knowing that I had heavy stuff that I couldn’t carry, I had borrowed a shopping cart from my mother. (She has graduated to a walker and is thrilled to have me start an affair with the shopping cart. I swear that it will be only a one-day stand.)

I looked more like a bag lady than a resident of the building when I pulled this into the elevator, but at least I knew how to swipe my fob on the panel of the elevator pad.

Kids – You will be relieved to learn that I did not take the cart when I went to the liquor store for beer. I returned a batch of the son’s empties, but used a more acceptable carrying accessory. Couldn’t buy a lot of beer, though, because I had to carry it back!

Wheeling a case of beer in my plaid-lined shopping cart would have been TOO much. I am not that far gone yet.

Our local media are having a heyday with that the statement that “Vancouver missed out on the top spot because its infrastructure score had fallen due to periodic closures of a key motorway.”