From Villafranca there are 3 routes to choose from: the traditional valley bottom route, which I have enjoyed twice in the past; the Dragonte route than goes way up and way down several times too many;  and the Camino Duro, which is somewhere in between,  although the name is a bit off-putting.

We took the Camino Duro, which was a hard climb for the first kilometer. It continued to climb but at a reasonable rate, and we were happy  have taken it.

The only problem was finding our way back down to the valley to join the regular route at Trabadelo. The day was overcast but we never lost sight of the river and highway, so we were never “lost,” but we put in several km of wandering the chestnut groves on the hillside before finding the switch backed road down!

We could see it but not reach it

We occasionally found hiking boot prints that suggested others had passed before. Also signs of short cuts taken.

Hard to see the steep slope where someone likely came down on their bum!

That was very enjoyable, but we then applied our boots to the road to reach our room reservation in Las Herrerías. 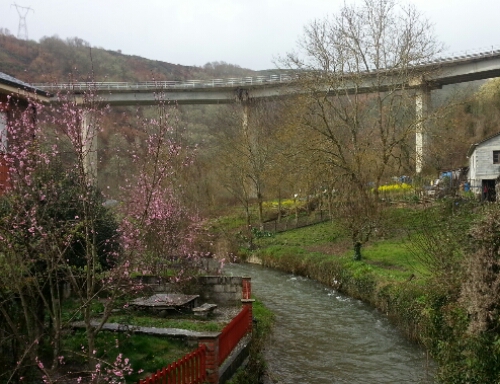 During the day, we must have layered up and down about 10 times (no exaggeration) before settling on full rain gear for the last 2 hours. We reached Casa Polin well drenched, tired, and and very ready to appreciate the local beer.

We didn't sit down once over 7 hours and 23 km. Not recommended.