Last week I wrapped up my contribution to the fall garden cleanup at home, backed up my computer, packed two completely separate bags and wardrobes, and flew to Toronto. Mississauga, actually. Even more actually, a hotel situated on a virtual island in the middle of the freeways and light industrial zones of the Mississauga-Toronto boundary. I then spent 6 days organizing and attending meetings, workshops, conference presentations, receptions and an awards banquet. I got out for an hour once, but otherwise was cooped up inside wearing business clothes, while Husband attended the hotel gym and tennis courts, watched TV, and even went sailing with my brother.

Conference over, we embarked on a family visit with my Brother and Sister-in-Law. The first evening involved a lecture for our intellectual enlightenment, not that I really needed to sit through another talk. I managed to stay awake for most of it.

The next morning I sent a few emails, turned on my out-of-office email response for my work email and declared the vacation started.

When the others had gone sailing the day before, they had managed to tangle a rope 20 feet up the mast. Brother said “No problem; we have a bosun’s chair and I’ll go up.” Brother is 220 lb and well into his seniority. On the other hand, my husband is slightly younger and very nimble on roofs, so we strung him up on the contraption. However, within a few inches it was distinctly uncomfortable for him and he wasn’t about to be dangled any higher.

The label said it was a “unisex” harness – we decided it meant that users became unisex after using it. Also it seemed that it would be helpful to have 2 stronger males for the winching procedure. So, for some reason (probably because I was the smallest), I was elected to try out the apparatus. They fitted me up, discovering that they had done it wrong with my Husband, but still I was led to the mast. They then proceeded to winch me up the mast so I could untangle the rope. They were totally thrilled with my performance. Apparently there were covert onlookers in the marina watching this quartet of seniors hoisting an old lady up the mast.

That done, we decided we had done enough sailing-related activity for the day and came back to the house. We made a healthy dinner and then consumed vast additional quantities of junk food and drinks while we carried on family discussions, played crokinole and cards. Did you ever try vanilla ice cream with maple syrup AND Grand Marnier? Delicious combination. 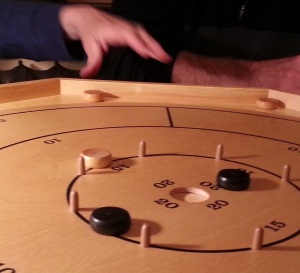 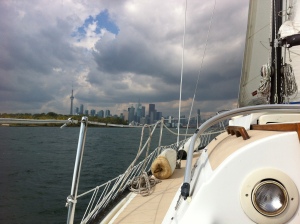 Now I should be reviewing my backpack and possessions for my  trip to Europe TOMORROW! First, though, I need to blog, so here I am. I will later attempt to post briefly with my packing list, and announce the start of my Camino.

5 thoughts on “Clareing the decks for the Camino”