This morning I decided that my toe needed a day off. An infected blister and amputation would put a damper on my plans. I packed up my stuff as usual since we need to vacate the albergue for cleaning, until early afternoon. I went for coffee with the Canadian Clan, exchanged email addresses, and said goodbye since they would be getting a whole day ahead of me and I might never see them again. The nurse among them recommended that I soak my foot in hot salt water three times today. I went back to the albergue where people were lingering having breakfast, and took advantage of the opportunity to give myself footbath #1. Very pleasant.

Then into the streets of Najera. Spanish streets are so quiet at times that it is hard to believe anyone lives there. Well, an exception would be the cafe where I had coffee. Several locals were clearly just wrapping up their Saturday night. One fellow was keen to chat in any language whatsoever with pilgrims, so I pretended to be mute.

Anyway, some pilgrims I’ve encountered before were leaving, including a blistered English girl. So I decided to follow and see how it went. Not good. Toe complained. So I said goodbye to them and took another turn or two around town, looking for a comfy pension where I could soak my foot all day. Now, remember what I said about Spanish towns appearing dead in the early morning. Not inspiring.

After the second circuit I saw a yellow arrow and thought “What the heck! Might as well walk westward, if I’m walking anyway.” There’s a village with accommodation 5.8 km away. I’ll go slowly and take 3 hours and stay there.

Last night I acquired some flip flops from the discard box, as they don’t aggravate my toe. They were dangling from my pack, ready for emergency use. They don’t easily fit inside.

90 minutes later I walked into Azofra, to the surprise of both me and the blistered English girl and her group. They were finishing a break. It was still early and my toe was no worse so I decided to continue further, with the help of a 2999-calorie ice cream. 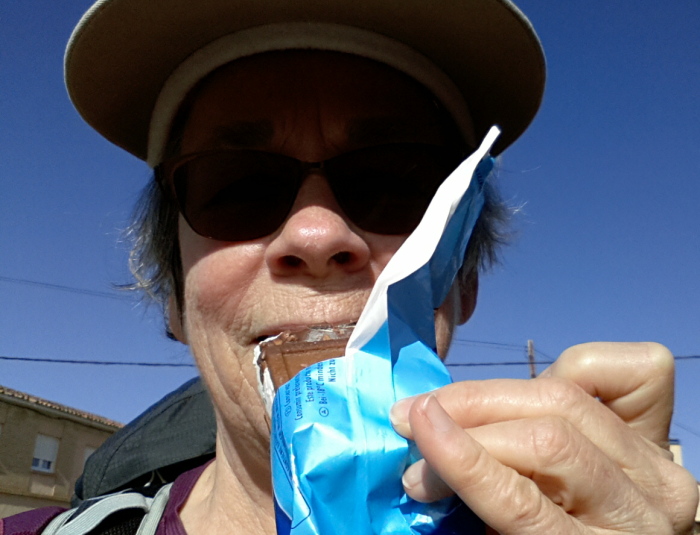 The walk was hot and tiring. When I took a break, counted my remaining toes, and put my boots back on, it took some time before they squished into place again.

Finally I approached Ciruena, another 7.5 km, and I was feeling quite good. (This is all relative!) However I decided not to push my luck and I’ve stopped for the night. My toe might even be improving and I got 13.3 km done!

This place is quiet, sunny and relaxing. It is next to a ghost town abandoned by developers in 2008 or thereabouts. There is a new golf course (used by weekenders) and hundreds of vacant condos. It might be considered depressing but I am enjoying a beer, having washed some clothes and hung them to dry. I took a walk through the old pueblo wearing my rain pants (more stylish than the only alternative, my long johns).

I’m at Albergue Victoria (not to be confused with Casa Victoria) in Ciruena (permanent population is 27) where I have a modern private room with bath for €20. Bunk beds with shared bath are €10. You need to keep left as you approach the old village. The host will serve a supper if I want (I do!) And he has a fridge full of beer and local wine. So far, the only other pilgrim here is a Swiss fellow who walked twice as far as I did today. I will go down to socialize as soon as I finish my third foot bath of the day.

Update: I was left in charge while the host went off for 10 minutes, and I had to show a new French pilgrim to his room.

Here’s my favourite photo of the day.

maybe Salamanca (or Avila) to Santiago, in the springApril 1st, 2016
I'm on the Way. Buen camino!