You might want to re-read that line by G.K. Chesterton and savour it, before I try to explain myself any further. [I am going to dig deep now for a plausible post. Sometimes it is a burden to have ANY readers.] 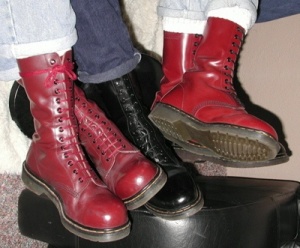 Budget accommodation – It is, literally, cheap adventure! Actually the main reason is that I can’t afford to travel any other way, but I have talked myself into treating it as an adventure that others should envy. I’m not sure I’ve convinced anyone, though.

Train travel on track maintenance days – Traveling by train in England when track maintenance was being done, we encountered a detour that involved a delayed shuttle bus between two towns, blistering sun, and nowhere to sit or buy drinks. We had quite an adventure sitting on a curb at a bus stop. The other passengers included skinheads wearing studded jackets and Doc Martens, and some little old English ladies possibly en route to a church jumble sale). The adventure lay in watching and listening to these two groups united in their complaints about the national rail system. It was worth the detour.

No seats available at the bus stop – This was a fabulous inconvenience. Poor us – the seats at the bus stop for our trip from the boat to Baltra airport were occupied by a couple of unfriendly creatures who had no intention of moving over to make room. Read more about those adventures by going to June 2009 at the bottom of this page.

Marriage – I have a husband. He is not always convenient. Need I say more? On those occasions I try to remember the adventure part.

Which brings me to… 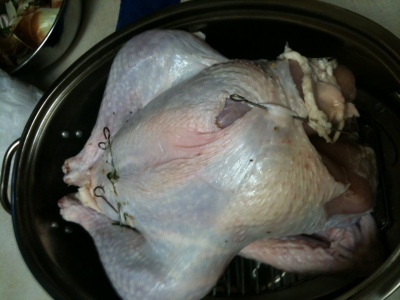 Utility turkeys – Husband wanted me to get a utility turkey. We don’t care if the wing is missing, or the giblets. So I got one for only $0.85/lb. On unwrapping, I saw that it was missing a wing and the giblets PLUS a huge swath of important skin that normally holds extra stuffing in the back end. So I pretended to be a student orthopedic surgeon (or maybe a breast surgeon). My dinner guests would be happy to know that I counted the skewers before and after, and the count matched!

Sometimes I am glad I don’t have a huge audience – fewer people to gross out.

The turkey tasted a lot better than it looks here.

3 thoughts on “Adventures – utility turkeys, marriage and other suchlike”