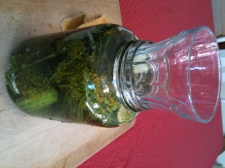 Almost ready  to sit for a week.

My rhubarb  wine instructions were Part 1 of my fermentation series. Part 2 is open jar dill pickles, which are easy and fun to make.

In a bowl, stir sugar and salt until dissolved:

Layer the cucumbers  and dill in a 2 L jar and dump in the chopped garlic. Cut or fold the dill stalks so they fit in the jar, and pack in the cukes. I like to stand them up straight in a little circle but you might prefer a more anarchic approach.  After you’ve packed them in, add the water-sugar-salt until the jar is almost full. I could have squeezed some more pickles into this jar. 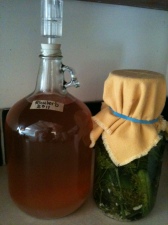 Companions for a week or two on the counter.

Here is the part that proves I actually do have a degree in  bioresource engineering: Put a weight (e.g. a glass, small jar, clean rocks) on top to hold the vegetable matter underwater. I found a drinking glass with multiple straight sides (i.e. octagonal) that fits just well enough to hold the cukes down, but  still lets some air in. You don’t want it to be airtight.

Cover with a cloth and fasten with an elastic band (the kind you might get on a bunch of  broccoli) to keep fruit flies from drowning. Often, it will get wet and smelly from the brine, but this time I had the design  PERFECT  and the cloth stayed dry.

Leave at room temperature for a week or two, and then eat over the  next  week or so.

Don’t know what the grapevine leaves are for. I had it written in my original  recipe, years ago, but have never used them! [Update: The grape leaves might have something to do with keeping the pickles  crisp. Dunno.]

Sometimes we add  some veggie like  green beans, which pickle nicely. This time I tossed in some zucchini chunks but after a week they were disgusting and inedible.

This batch of pickles was delicious. As mentioned, I didn’t have enough cukes to fill the jar properly. Don’t let a bit of fuzzy whitish-grey scum on the top bother you. The first time I made them,  I waited a day or two after my husband started eating them before I let the kids have any. I was  observing to see if he survived without poisoning. (He was  fearless because his family used to make them.) 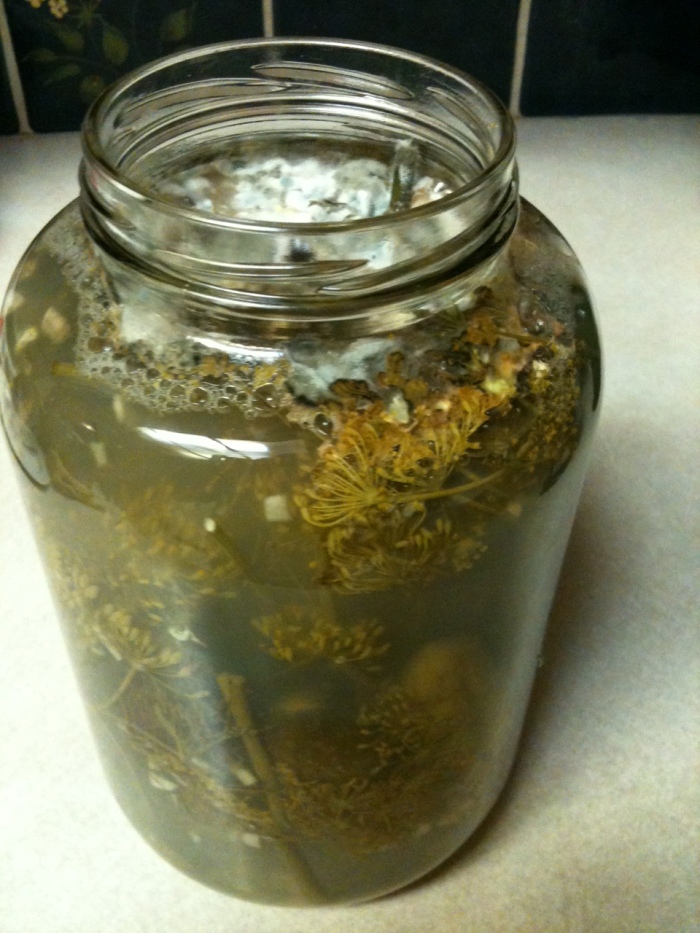