The Lunatic Express is subtitled “Discovering the world… via its most dangerous buses, boats, trains, and planes.” I requested the book from the library after reading an article by Hoffman in the National Geographic Traveler. The book was well-written and fun to read – for the first half anyway. After that, the grueling bus/train/boat trips became, well, grueling. The author would be an interesting person to sit next to, on a bus going somewhere. However, he did have a poorly-disguised death wish that I don’t share. Every time I’ve had a lunatic driver or vehicle, it has been unintentional on my part, whereas he deliberately sought them out.

Hmmm. This wasn't in our plan.

Lost in the Amazon is subtitled “The true story of five men and their desperate battle for survival.” I loved the setting – started in my favourite jungle city, Iquitos, Peru (which definitely has lunatic traffic), and went into the Amazon jungle in the same area I wrote about. I even slogged through above-knee-high swamp with knee-high boots, possibly lost. And had a close encounter with a fer de lance. For some reason the book didn’t strike my fancy. The author got quite annoyed when, after going all that way to take jungle photos, his camera became disfunctional due to the jungle conditions. I sympathized, since I also have known the heartache of dropping a camera into the Amazon, but still…  Also, I don’t view prayer as an adequate jungle survival strategy. Somehow, I believe there is another book waiting to be written about that area, and think I should go do some more research.

Yes, that is a Tilley hat. And yes, I have lost 10 pounds since then.

Here I am, sitting on a branch on a tributary to the Amazon. Had to check for ants first, and also trust that my guide and boatman wouldn’t abandon me with my camera.

On another trip (photo below), you can see me cross an unexpected watercourse in Panama. I’ve been waiting for an excuse to post this photo. I was quite proud of myself, considering that I was still bald from chemo (thus the cotton cap). I think a jungle expedition is the best cure for, if not cancer, then the associated malaise. 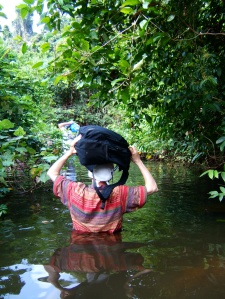 Another trip in Panama. At the time, I didn't think about crocodiles.

I was just putting the finishing touches to the above post, when I got the following Facebook message from daughter N. She was perfectly on-topic…

Survived Laos, spent last three days living in a tree in the middle of the jungle, ziplining hundreds of meters way above the forest canopy from tree to tree. Not going to lie, it was kind of terrifying, if your harness broke you would die for sure. Wait til I show you videos it was awesome! Fought leeches (I found many on my shoes and legs but always managed to get them before they really suck in), shared the tree with severasl tarantulas (or what looked like them..) shared a  terrifying hour long tuk tuk ride (moto taxi) with what we thought was a black widow (distinctive red hourglass), but it was more of a dark brown and I thought black widows were jet back, after googling it, I am right and believe it was a brown widow or something, which are less poisonous. Fun fun! Oh also almost fell through a bridge over a raging river, it was so sketchy and the board I stepped on completely broke in half and my foot fell through, luckily I was holding on and the board my other foot was on held strong.

In Thailand now, going to ride some more elephants, prob do a 2 day rafting trip and a cooking course, then back to Aus.

Readers: What sort of motherly cautionary advice do you suggest that I offer?

3 thoughts on “Books: The Lunatic Express by Carl Hoffman, and Lost in the Amazon by Stephen Kirkpatrick”