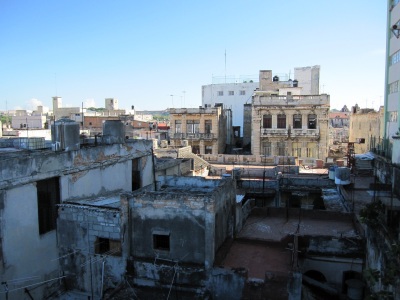 Havana is stunningly shabby and elegant. It could be the years of neglect, or it could be the type of materials used in construction, but everywhere there are crumbling buildings with vestiges of ornate detail and grandeur. The view from the rooftop is an unrelenting mess – one can’t imagine where to start renovating!

Streets in Old Havana (Habana Vieja) are spooky at night.
Old Havana is a UNESCO heritage site. For a number of years now, the office of the city historian has been very active in raising foreign funds to carry out restorations. There is an agency – owned by the state, but operated independently – that is allowed to run hotels, guided tours and other tourist services. They use a certain percentage of the proceeds for social programs, a certain amount for restoration of buildings, and another amount goes to the government.

Here’s a square in the old town that has been fixed up. It reminds me of Prague. Those are spare cannonballs being used as traffic barriers.

Revolutionary messages are everywhere – on roadside billboards, handmade signs on houses, displays in museums. The U.S. blockade, and the imprisonment of 5 Cuban spies in the U.S. a few years ago, serve to keep the commitment alive after over 50 years. In fact, a display in the Museum of Revolution actually thanks several U.S. presidents for keeping the revolution strong. Cubans seem proud of their resilience and progress, even though they wish the stupid blockage would end.
Finally, the quintessential Havana malecon, with a man practicing the trombone at sunset. 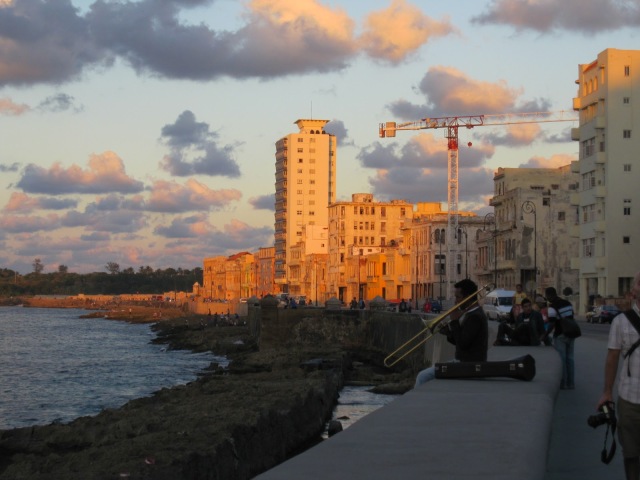 One thought on “Havana”