Yesterday life returned to normal, with schools, work and activities and the town seems much more cheerful than when everyone was cooped up. The gloominess of jet lag, grey weather, 2 funerals, deteriorating

house and aging in-laws, has lifted.

Here is a photo of J’s 93-year-old father trying to patch the roof of the house. Everyone has advised him NOT to go up there, and we wish they would just get a new roof and fix the house. They can afford it, but the decision-making and changes seem to be too much.

A snowfall of about 3 inches brightened the mood a lot. We have been on several long walks up the river and to the base of the ski hill but I haven’t been up the mountain.

Inspired by the new snow, yesterday my sister-in-law took N cross country skiing on a route she hadn’t skied for many years. Then went up the lift, rented skiis and set off. The weather started out overcast but there were sunny periods in the afternoon.

N was new to cross country skis, being more familiar with fat powder skis. On one occasion at a crossroad they asked directions of a serious skier (obvious from his spandex attire). He said their route was fine, but was for experienced skiers. (They were not wearing any spandex, at least visibly.) N promptly lost her balance while standing there, and fell over in a tangled heap. Apparently she was laughing so hard she couldn’t get up for some time. 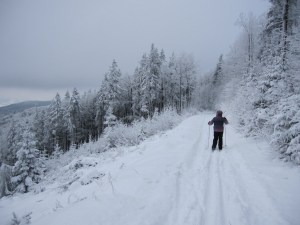 They continued on their way, eventually arriving in the next town, some 20 km away. They agreed that the trail was ENDLESS. It was so gently sloped that they couldn’t even coast. They got on a bus to return, and have to take the skis back today.