Again we only walked the last 12 km, from the Embalse de Alcántara to Cañaveral.  I think we’re now finished with the motorized transport and will be able to walk the remaining 700 km or so.

The absence of accommodation at the Embalse is a bit of a problem. (I emailed the fishing lodge,  Pesca Evasion, and they replied that they were full, completo. Tuesday night in March?) 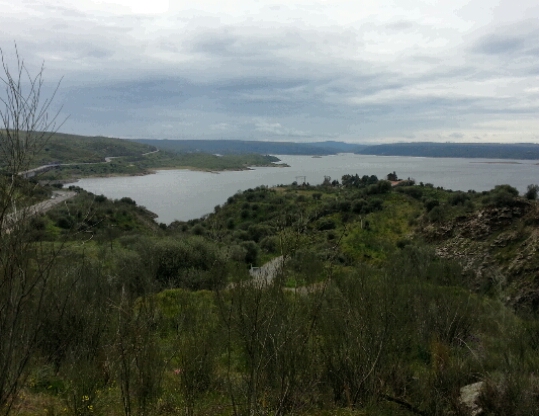 We decided to skip the 11-km highway walk to Casar de Cáceres, and take a taxi 35 km from Cáceres to the Embalse  (reservoir) de Alcántara  A word of advice: Make sure the driver understands exactly where you want to go, in this case to the east end of the reservoir, near the lodge Pesca Evasion and the closed Albergue Embalse de Alcántara.  By the time we convinced the (very nice) driver that we were not going the right way, we were almost at the scenic bridge and town of Alcántara on the west end of the large reservoir.

Finally we were dropped off at the right end of the reservoir. There is a sign showing the route near the turnoff to the fishing lodge.

Reservoir on the left, Via de la Plata on the right

In the distance (photo is zoomed) we could see the construction of a new high speed train route (to Lisbon?)

We took our time walking to Cañaveral, enjoying the quiet, and glad to know there are no more 30+ km stretches to deal with.

The Albergue de Cañaveral is excellent! It is on the right side as you head up the hill into town. We have a 6-person room to ourselves, there are 2 men (German, Spanish) in the room next door, and a couple (Italian) in a private room. There’s another German pilgrim elsewhere in town. Everything is new and well organized, there’s nice bedding, and the view is great, as is the food. Perhaps the best albergue I’ve  stayed in! 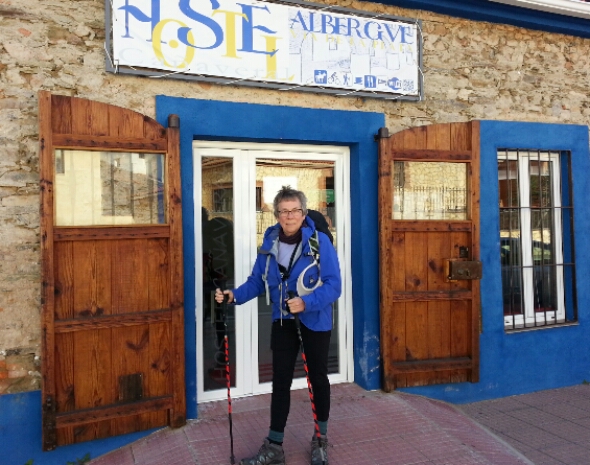