Now, only 3 months after returning from Spain, I’m about to go again. Tomorrow I fly from Toronto to Spain with my sister-in-law MB, and on Monday we begin walking north out of Merida on the Via de la Plata*.

Why so soon? Having been several times on the Camino Frances in late autumn, I wanted to try another route and do it in the spring. That meant either waiting a year and a half, or going in spring 2016. This is a bit early in the spring, but some other commitments limit my choices. As the map above shows, there are quite a few more routes to go through, so I’d better get on with it! 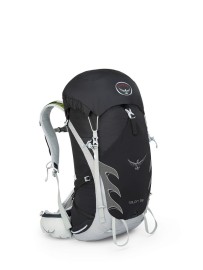 MB has never done a long distance walk so she’s feeling a little uncertain. I have done several, so I’m feeling uncertain too. We’ve put in many hours of equipment discussion and preparation and are as ready as we can every be.

I was searching for a new backpack because my trusty Osprey Talon 33 wasn’t looking right. I had put it in a hot tumble dryer a few times back in 2013 and it developed an unhealthy curvature of the spine. I wasn’t able to find a better one. Since Osprey have a famous “All Mighty Warranty” (no fault), I called the distributor to ask if they could send me a new panel for the back. (It’s removable, but I hadn’t noticed before I destroyed it with heat.) They said No, but would send me a new backpack. I paid to mail it to Montreal, and 9 days later a new one was waiting for me at my brother’s house in Toronto. In fact, my sister-in-law liked it so much she went out and bought one too. At least she got a different colour.

My updated packing list is now posted on a different page of my blog (see the menu tabs at the top). I tested my layers yesterday in -10C in Toronto I was warm enough!

* An interesting fact I’ve learned recently is that “The term Vía de la Plata is commonly thought to [derive] from the modern Spanish word for silver, plata. The name actually derives from the Arabic word al-balat, which means cobbled paving and describes the road as engineered by the Romans.”  (Wikipedia)