The mood is changing. I don’t know if it is the current group of personalities or the time walking, but I’m encountering a bit of silliness while the pilgrims relax with each other and their routines. Although walking alone, I’ve been eating and drinking with a lively group including several Spaniards plus an assortment of others, all of whom started out separately. They have been friendly and funny – irreverent in a way some pilgrims are not. Some of us are about to go to mass, while others are vehemently not. We are staying in a nice big albergue run by nuns, in Carrion de Los Condes, which inspired some intense but cheerful discussion.

Settling in for an evening on the camino

Being with this group has been great for my Spanish. I’d say I understand about 80% of the conversations, which pleases me. However, that last 20% leaves me clueless of subtleties. (Have i spelled that right?) During one intense discussion about languages, I thought I understood all the words, but I just couldn’t grasp the essential differences between two positions. And there obviously was one.

We enjoyed tapas in a bar typical of this part of Spain. I would have been uncomfortable if I weren’t with some Spaniards. The place had 15 or 20 men, mostly of a seasoned age, playing cards and drinking.

The only women were two young ones, perched on stools in bright colours, contrasting the men. They looked perfectly respectable but totally out of place. When the Alsa bus pulled up, my curiosity was satisfied as they left to get on the Madrid bus that they had been waiting for. That left our group of 4 plus all of these cute guys. I had to pretend to take pictures of my companions and then zoom and crop to get the subjects of real interest. 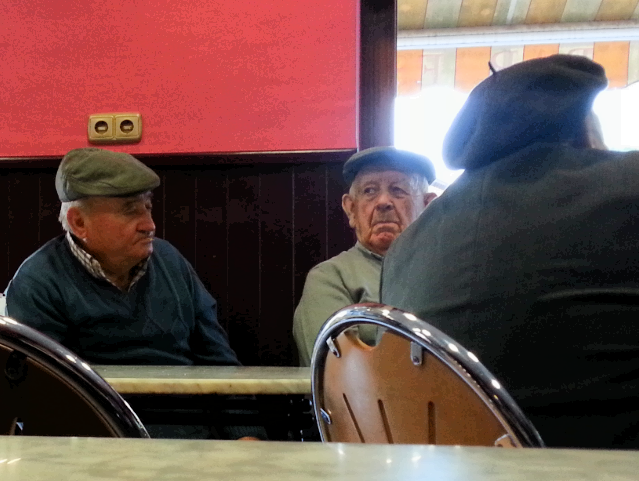 A little later… I love the cane.

5 thoughts on “Week 3. Pilgrims are getting silly now”