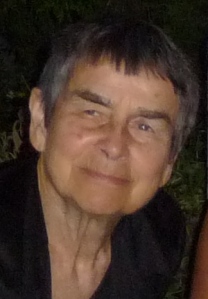 On January 12, I wrote a post about the tedium and demands of care giving to a dying mother, and how I went out for three brisk 30-minute walks that day (to get fresh air and exercise but not leave her for longer periods), and how I did stretching exercises while waiting for her to do her business in the bathroom. I then removed the post because it might seem frivolous or insensitive. [I have now restored it.]

Mom’s pain (both physical and psychic) had eased a lot since the worst disillusionment of a few weeks ago. However, Sunday evening she was not coherent or settled for the night, and sleep was out of the question for me. I put on a dressing gown and sat on the wheelchair beside her bed, my feet up on the seat of her nearby walker. I held her hand and watched home renovation programs on TV. Her breathing was shallow and rhythmic with odd noise patterns. There were occasional lucid moments and more frequent incoherent comments (she asked “Is that program all about sex?” I answered: “No, it is some people renovating their basement.”)

Quite often she would urgently ask “What’s next? What do I have to do next?” It was impossible to know if she was asking about the next hour, or whether she was catching glimpses of deserts of vast eternity. [The epitaph on my father’s gravestone, soon to be hers, is part of a quotation I found on a scrap of paper in my father’s wallet after his death.]

But at my back I always hear
Time’s wingèd chariot hurrying near;
And yonder all before us lie
Deserts of vast eternity.
[Andrew Marvell,1621-1678]

I despaired about how I could keep this up without sleep for unknown days, weeks or even months to come. A person more experienced with dying would have known, at this point, that it wouldn’t be long. At 6:34 a.m. I texted my sister (whose time zone is 4 hours later) “This has to end soon. I’ve been at bedside pretty much all night. She has very labored breathing and is incoherent. Somewhat agitated and fiddling incessantly with bed covers. I need nurse’s visit today.”

Her breathing had begun to slow down. I started counting the seconds between breaths and hoped that each breath would be the last. 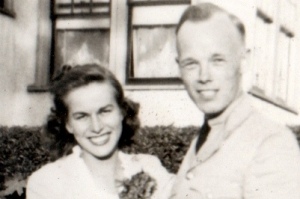 “And yonder all before us lie, deserts of vast eternity”

For earlier chapters, click on”Anne’s story” in the menu at the top of my home page.

Anne is my mother (1922-2014), who had a childhood that would have been a good subject for a novel. She figured rather prominently in my life in recent years, as I was the only one of her children who lived nearby during my parents' last years.