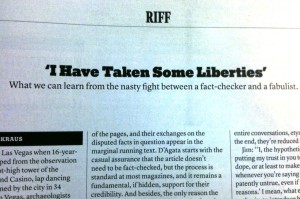 Interesting article in the New York Times Magazine of Feb 26, 2012. (I’m a little late, since I read an assortment of magazines from the neighbourhood library whenever I notice them.)

The article, “I have taken some liberties,” addresses fact-checking and the fine lines between fact, non-fiction, essays and outright fiction. And, of course, the question of whether it matters. It describes a clever and funny correspondence between the writer and the fact-checker.

My mother and I have a long-standing debate on this subject, as we do on a variety of topics. She likes to write – mainly her informal memoirs these days as she gets ready to celebrate 90 years. She reads my blog, particularly my stories about her life, and is careful to make notes and inform me when I have the facts wrong. For example, I said that after her first child was born, she had to stay in bed in the hospital for X days, then was allowed to stand, and finally went home after Y days. Well, turns out I had the number of days slightly wrong so she made notes and informed me. I said, OKAY, already, it doesn’t really matter. It’s close enough.” Besides which, that baby is collecting old age pension now.

Our ongoing debate tends to address more cerebral issues of honour and reputation. She’ll say (quoting her mother, which I will never do, of course) something like “If someone can’t trust your word, what do you have left?”  I answer “I have lots left! I have someone who knows that my word might be a little bit off, but there is much more to me than those facts.” Mom acts as if one’s honour and self-esteem are dependent on surviving the fact-checker. She believes in a higher value called “Truth.” There is something antiquated about her trust in this.

She is concerned with getting the Truth down on paper, presumably for posterity. I say that after one generation, it really doesn’t matter to anyone whether we lived at 103 Main Street in 1970, or at 110 Main Street. (However, the fact that we never lived on Main Street at all, is significant to me.)

Next time we are short of conversation topics, I’ll try the old piece of advice “never confuse truth with reality” and see where that takes us.

The Fact-Checker vs. the Fabulist (same NYT article as linked at top of this post)