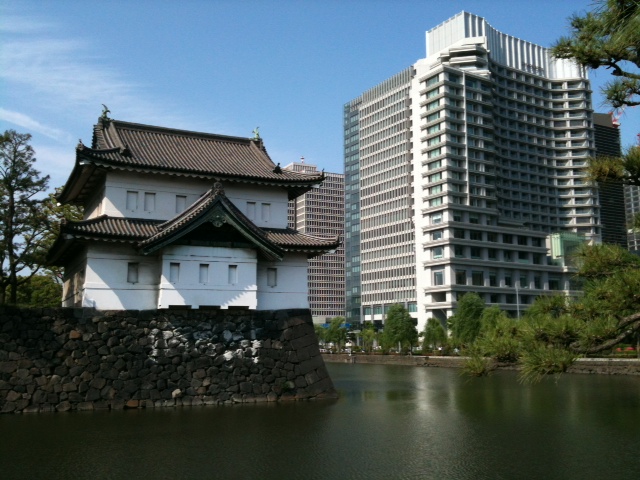 Our first morning in Tokyo we headed out toward the Yasukuni military shrine and happened upon the Sunday antique market. There was everything from World War 2 helmets and memorabilia to old photo albums, kimonos and junk jewelry. Maybe there were real jewels too, but how would I know?

As we exited from the East Garden of the Imperial Palace, a Japanese couple struck up a conversation with J. They invited us to join them for lunch, which we happily accepted. We went to a nearby building which had floor upon floor of modern restaurants and shopping. We ate in a very nice but reasonably priced place that we never would have found otherwise. (I can’t post a photo until I get one off my camera.)

The man was a professor of Japanese language and his wife was originally Korean. They had been to Vancouver, Prague and Sydney, and liked to practice their English. Too bad we didn’t take advantage of the occasion to learn some Japanese. We are now starting to feel we should be trying harder. Since that was our first day in Tokyo, we hadn’t really faced up to the dilemma of trying to select food in Japanese. Many times since then we wished we had this couple with us to translate and provide instructions!

We’ve had the stir fry meals by pointing to pictures or plastic models and hoping for the best. J learned that a certain red character means hot (spicy). I got what was clearly beef. 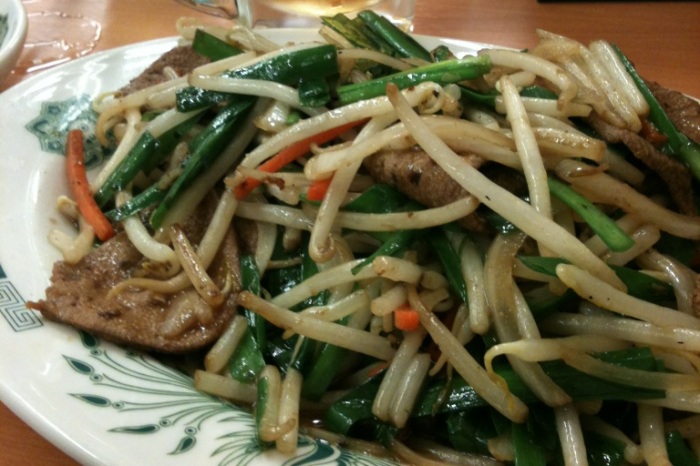 Another meal was fast-food cafeteria style – tasty tempura fish and vegetables, and an udon-noodle salad. We had expected some hot soup, and the server tried to explain something, but of course we understood nothing.

Finally we determined to go INTO one of the many many restaurants in the alleys and side streets. But it is very intimidating to not understand ANYTHING on the signs, especially when we are not big fans of raw fish or exotic animal parts. We ventured into a restaurant that had some words including yakatori on a sign. That was the last word we understood except that the menu had a section labelled Food and a section labelled Drinks. I suppose it was good to confirm that both food and drinks were available. The only picture on the menu was of a mug of beer. That was important, so we stayed. We had chicken yakatori, rice, and a bowl of unidentifiable things.

After we paid, we bowed our way out of the restaurant, saying arigato, arigato.

4 thoughts on “Eating in Japanese”