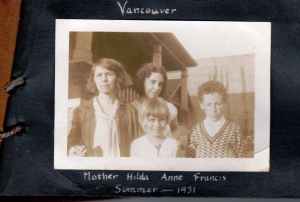 Florence (blind) on the left; Anne in centre front

In the summer of 1931, family friends took 9-year-old Anne on a driving trip to Vancouver, BC, so she could spend 3 months with her mother. The 2-week trip from California was in a big old touring car, equipped with running boards full of camping gear, staying in river-side campsites on the way north. She remembers being in a phone booth in San Francisco while the adults looked up the number of her father. They went to visit him and his new wife, and stayed overnight. That was the only time she ever saw her father.

Arriving in Vancouver, Anne was left to stay with her mother, who was also a stranger. Florence had recovered from her mental breakdown but had gone blind with cataracts. (No I am not making this up!) Anne was embarassed by her mother’s white cane, but impressed by her ability to read braille in the dark under the bed covers. Florence had learned Braille and was operating a canteen/smoke-shop in the old Pat Burn’s Meat Packing Plant in Vancouver. She may have been the first blind woman in Canada to do so. She had 3 employees and lived independently in a rooming house. Can you imagine being completely blind and having your 10-year-old daughter, a stranger, come to visit? Can you imagine being that 10-year-old?

Anne stayed 3 months with her mother that summer and then returned to California. 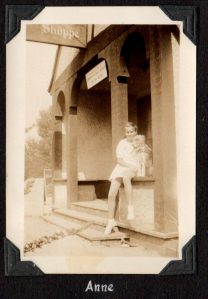 Florence applied to regain custody of her daughter. Adam also applied and a legal battle ensued. (To give him credit, it is possible that he had previously thought Anne was better off to stay in her California home, but decided that if she was to be uprooted, his own happy new marriage was a better bet.) Finally, custody was awarded to the mother on the condition that she have surgery to restore her sight. She went into serious debt to have one cataract removed.

So, in 1932, Anne was torn from her happy home in California, to live permanently with her mother in Vancouver. Florence was blind in one eye, wore thick glasses on the other, was deaf in one ear from a childhood injury, and trying to be self-sufficient after 10 years of mental illness followed by blindness.

As you might guess, Anne was quite unhappy for awhile but adjusted remarkably well. Florence managed to stay independent, although the welfare agencies also played a role. She continued to work for a while in the blind canteen, then canvassed to raise funds for the blind, and finally returned to her career as a stenographer. She was proud of how she had coped with blindness and had several articles and poems published in the newspaper. More importantly, her mental health seems to have been good as she rose to the challenges of raising her daughter. As far as Anne knew and remembers, there was no mood disorder or other mental health issue.

Florence ensured that her daughter had the necessities of adolescence. Anne made friends, played tennis and swam at public pools in Vancouver, she was a good student, and went to Sunday School. She and her mother lived in a series of rented rooms, cooking on hot plates, saving pennies for an occasional movie.

There was no communication with “Aunt Claire” in California, as the conventional wisdom of the day was to sever such relationships decisively and then never discuss them.

Anne is my mother (1922-2014), who had a childhood that would have been a good subject for a novel. She figured rather prominently in my life in recent years, as I was the only one of her children who lived nearby during my parents' last years.
Loading Comments...
%d bloggers like this: