Stairs down the cliff, over the railway, to the beach 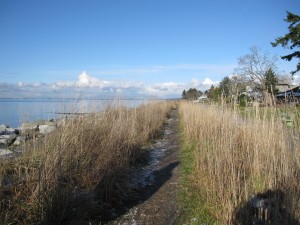 Often on weekend days we walk to the beach and around the peninsula. It is a 1.5 to 2.5 hour trip, depending on the diversions.

Count 19 eagles in this photo

There are frequently bald eagles around. They are the official national bird of the United States, where they’ve been an endangered species, although the population has recovered considerably. They have been plentiful in Canada and Alaska. However, it seems that in recent years, the eagle count in Squamish has been declining.

Yesterday at the beach we saw a couple of eagles harassing some seagulls. Within minutes, dozens of bald eagles had appeared and treated us to a display of swooping and gliding – they looked like an extended family on an outing to teach the juveniles the tricks of the trade.

They swooped and dived and raced about like jet fighters. Then they disappeared, perhaps to an air force base south of the border, where they have official status. 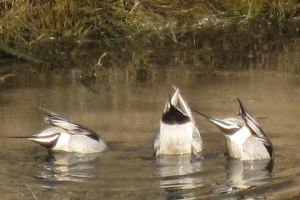 The walk continued. There is always much to watch, at any time of the year.

There is a long walking path along the ocean.

In winter, leashed dogs are allowed. 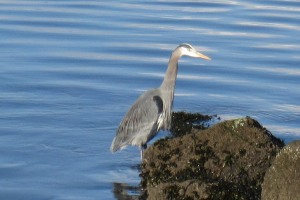 Yesterday, we saw a first for me – Canada’s national animal, the BEAVER. Sorry folks, no photo, since my phone had died.

An unmistakable beaver pulled him/herself up on the bank, gnawed at a stick, and dragged it down under the edge of the slough. Quite a crowd of us gathered 20 feet away to watch. There was no beaver dam, but clearly it had a den under the side of the slough.

We went back today with a fully-charged camera, but the tide was higher, so you can’t really see the entrance. As you can see, we had a dusting of snow overnight. Evidence of beavers has long been nearby – I just never thought they really still existed in the area.

There is a move afoot to change the national symbol from the beaver to a polar bear or something else. I say NO, NO, NO. As my daughter would say, “Beavers are cool.”

Entrance to the den was below the water line. We watched from the bank at the top of the photo.

3 thoughts on “Birds, borders, beach and a beaver”