This was written during my long flight… 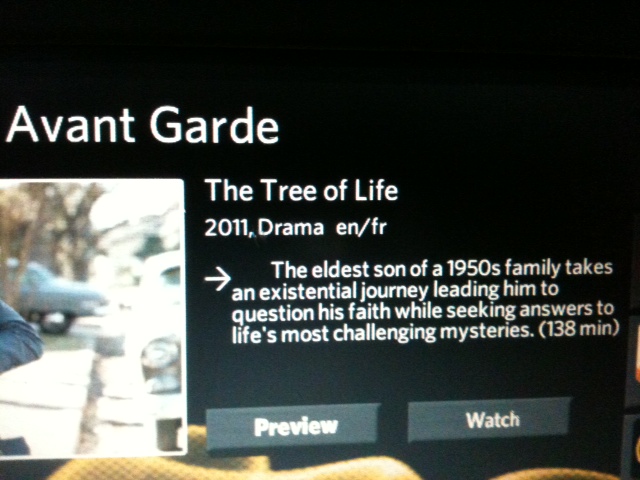 I do all my movie-watching on airplanes. I am watching one now which inspired me to pull out my phone (in Airplane Mode, of course) and start reviewing immediately while I watch. If you infer that I am less than captivated, you are correct.

This is a WEIRD movie. Do not pay any money to see it. A couple’s son apparently dies at 19 and we are watching emotive images and fragmented memories. Many many minutes of thunderstorm skies at night, ocean views, forests, more water, crickets in the background, occasionally glimpses of family scenes, scenes of birth and childhood, murmured statements like ‘you touched my heart’, erupting volcanos of red and black. There was even a scene with dinosaurs – I have no idea what that was about. (Probably it was to evoke the childhood fascination.)

Interspersed among these images we see snippets of the family, all with virtually no conversation and no discernible plot except a relentless sadness and regret. The father dominates the family – rather unkindly in a strong-manly-restrained-love sort of way. The mother is a paragon of beauty, patience and lovingness, but she never says peep to stand up to the father. Family scenes – mother hanging laundry, beautifully and soulfully. Oldest boy is not a happy camper and we know he is doomed. (Did he commit suicide in the end? I likely missed some clues when I dozed off.)

There was a period in the movie when I was optimistic we’d get a bit of plot, or fuller character development. However the denouement was long and spiritual. (As you may know, I am not a highly spiritual person.) Things ended with people walking through symbolic doors (door frame in the middle of a rocky desert, so even I clued in!) and a mass of people walking in the shallow water at a sunny beach, some getting their shoes wet, with glorious music (maybe a baptism and new beginning symbolism) while beautiful mother raises her hands to the skies, saying repeatedly “I give him over to you.”

I make no apologies for my incoherent writing in the last paragragh, which perfectly describes the situation. I do apologize (fingers crossed behind my back) for my lack of intellectual and spiritual capacity to appreciate what might be a brilliant piece of art.

If I weren’t so enamored of my blog, I would have switched channels long ago. I am watching and writing at the same time. Maybe I’m not giving a fair chance to the movie. In any case, I had to watch to the end so I could report to you.

A 15-hour flight is a rare opportunity to watch a long strange movie and write a long strange review, so here it is – ready to whiz through the internet once I find wifi.

One thought on “Movie review: The Tree of Life”