A linguist’s blog on the most annoying grammar mistakes has inspired me to review two of my favourite books (see my page called Favourite Things).

I am surprised by how many language fans are not familiar with the classic by H.W. Fowler – Modern English Usage, and I am dismayed because they are missing a wonderful thing . I don’t expect you to read it cover-to-cover, but it is an excellent choice for the bathroom browsing. 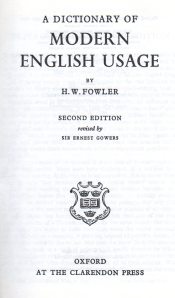 As a general filter to determine your potential as a Fowler fan, consider his comments on split infinitives, which could easily be applied to any topic of grammar. He says,

Now, go look at (and preferably read) the Wikipedia summary. If you enjoy the Quotations there, then you will love the book – but ONLY the 1965 or 1926 editions.

If you are still with me, here’s an example of Fowler’s wit and wisdom, with respect to the use of they/their/them instead of “he or she”.  He favoured the generic use of “he” while admitting that it “is an arrogant demand on the part of male England,” and concluded that “everyone must decide for himself (or for himself or herself, or for themselves).”

On my mother’s pet peeve… Fowler says that “‘Between you and I’ is a piece of false grammar which, though often heard, is not sanctioned, like its opposites ‘It’s me’ and ‘That’s him’, even in colloquial usage. But it has distinguished ancestry. Shakespeare wrote ‘All debts are cleared between you and I’, and Pepys ‘Wagers lost and won between him and I.'”

Mainly just to argue with my mother, I pretend to be tolerant of this solecism. I tell her that rules of English grammar are mainly an art form, which some of us happen to love, but not everyone does, and the power of English is shown by how badly we can mangle the rules and still be understood. Bill Bryson’s The Mother Tongue: English And How It Got That Way should be required reading before anyone is allowed to moan about bad usage and the decline of the English language.

Oddly, not one of my kids has ever shown the slightest interest in arguing with their mother about grammar. They don’t (GASP) seem to care much.