[This is a post I wrote on my i-pod on the last day of the Olympics. Now the excitement is all over and people don’t know what to talk about. The Paralympic Games start this weekend, so we are being let down somewhat gradually…]

We decided to go downtown for the last day and forego the comfort of our own TV. We met up with A, walked around watching people get ready to watch the hockey game at the stadium, in bars and restaurants, and on big screens on the street. We ended up in the Bay (department store). We are in the furniture department along with a few dozen others, watching the game. It is funny to watch the regular shoppers come up the escalator and look startled at the crowd sitting in front of the TV. The electronics floor has a huge party going as well. 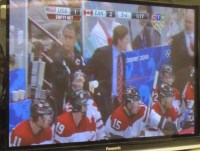 At the end of the second period Canada is ahead 2-1 but the game is very close and intense.

Later… Well that was a close call. The USA tied the game with only 20 seconds to go. Ten minutes into the overtime, Canada scored to win the Gold. Sorry, American friends, but we really wanted that one!

The streets were crazy with jam-packed masses of people wearing red, shouting, singing and high-fiving strangers, traffic cops and little kids. There is J dressed in his best red-and-white, with a cowbell handing around his neck. The hat is on backwards to show off the maple leaf.