The romantic and spectacularly scenic train trip across Canada (well at least from Vancouver to Toronto) has not been as impressive as I expected. Mom has always raved about her train trips, and we were trying to re-create something on this trip. I did it as a child and of course it was a huge adventure then. It is an extremely Canadian journey – an important part of our history. So, in responding with anything less than complete enthusiasm, I feel like an unpatriotic crass modernist who doesn’t appreciate the finer things of life, including history and tradition. Furthermore, the trip was so expensive that I feel obliged to appreciate it. I should emphasize that the trip was still interesting – just not a totally wondrous experience.

Myth #1: “The train is restful and it rocks you to sleep.”

No way! The train jerks, starts, stops and rattles all night. Then in the daytime you can’t feel like you are on a restful journey because you haven’t slept, and there is no opportunity to get some fresh air to perk you up. This was probably the biggest problem on the trip.

Sometimes I wanted to jump off the train and walk beside it. Maybe even get behind it and PUSH! I don’t get bored – I had lots to read. I just can’t take so much inactivity.

Myth #2: “A key pleasure of train travel is that you meet people and can talk to them in a leisurely fashion.”

That is true in a way. However, that assumes that you will meet someone you want to talk to for more than a few minutes. In fact, the demographics of first class train travel are of a group more sedentary than a typical cruise. In first class, people either sit in their separate sleeping accommodations or they go to the dome car. In our separate compartments, we don’t talk much to others. I talk at least as much to people in airports as I did on the train. At every meal the passengers are seated by the staff, so you get stuck with whoever entered the car at the same time. Sometimes this is great, sometimes not! Generally the people were nice, polite, well spoken and well behaved. (Yawn.)

An exception to the “well behaved” apparently happens on every trip. There is always a couple who feel they have a right to occupy the front row seats in the dome car for the entire journey. They leave things all over the seat when they go to the dining car, to intimidate anyone who thinks of sitting there.

Mom and I were seated in the dining car with our train’s designated dome-seat-hoggers – 2 men). The train attendant came into the dining car and asked them if it was their camera and books sitting on the seat in the dome, because the car was getting crowded and others wanted to use the seats. Well, one fellow got quite disturbed and said he was a photographer and needed that seat. He abandoned his lunch before starting, in order to rush back up there and hold his seat. That left his friend somewhat embarrassed and eating his lunch with us. Frankly, I didn’t need to take a train across the country to meet them.

I told Mom that if we had flown, we could have gone to a park or coffee shop or bar and sat there for 3 days, making new friends.

Truth #1: “The meals in the dining car are sumptuous.”
Well, they are certainly delicious and the high points of the day. (Almost the only points of interest during the day!) Every meal was 3-4 courses and 3000-4000 calories.

Myth #3: “The Prairies are boring – you can’t see anything.”

I found the Prairies more interesting than, say, the trees in Northern Ontario.Here’s a nice view of a watering hole on the prairies, from the dining car. And another one of a potash plant in Saskatchewan.

Truth #2: The natural scenery is spectacular…

but the populated areas are just as interesting. 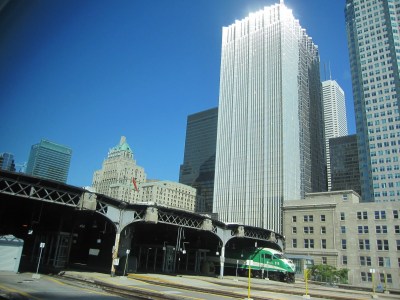 One thought on “Taking the train across Canada”